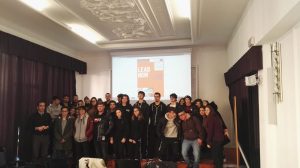 SAN BENEDETTO DEL TRONTO-Italy – With “EuroPeers Network Meeting”, the Risorgimento Academy of San Benedetto del Tronto broadens the youth training horizon. In this regard, the intense morning organised in the Auditorium of the Accademia Risorgimento raised great curiosity and interest. During the conference, the participants listened to testimonials and guidelines by videoconference with various European countries, to better enjoy the next experiences abroad already planned. As illustrated by the speaker Alceste Aubert (Erasmus Project Manager), the EuroPeers initiative is aimed at students who do not always have access to information relating to European policies in favor of young people. The opportunity to meet other young people who have already lived abroad experiences therefore becomes also a prerequisite for new ideas aimed at the participation and development of new European Projects open to the creation of further training opportunities for young students in the area.

A few months ago, the Italian National Youth Agency decided to launch the national network of Europeers in Italy, a network already present in several European countries and which finally arrives also in Italy with the aim of involving young people who participated in youth exchanges, European volunteering experiences, European solidarity projects, structured dialogue at European level or other opportunities provided for in the European Youth Programs, most recently Erasmus + and the European Solidarity Corps .

“The initiative is therefore aimed at all young people who, returning to Italy, are available to become promoters of the opportunities that they have experienced firsthand and who, precisely for this reason, will be an incentive and example for other children who do not they always have access to information relating to European policies in favour of young people, and they do not always know what the European Union makes available to all young people” says Aubert Alceste, Erasmus project manager, with more than 40 Erasmus + experiences” The call is still in progress and therefore the Italian network has not yet been formally established.