On the 31st of January 2020, the UK officially exited the European Union and entered the transition period. In spite of these events, I was taking part in a Youth 4 Europe Summit in Italy and felt just as European as ever.

What is Youth 4 Europe?

Y4E is a long-term project funded by the EU Commission under the framework of the call ‘European Youth Together’ (KA3 Erasmus+). It brings together young people from the UK, Italy, Germany, Spain and Romania to discuss, debate and deliberate their own policy proposals on key topics to the EU. Over the past year, the topics covered are; non-formal education, the environment and media. In Italy, we focused on the latter and my team decided to particularly focus on the misrepresentation of minority groups in advertisement. 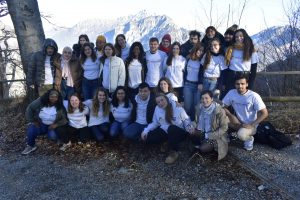 It’s an amazing project because it facilitates young people’s active participation in democratic processes. Y4E helped me feel that my voice was valuable, and listened to by the European community and it’s so inspiring to think that my team’s proposal actually has the chance to inform European legislation in Brussels. All this, in spite of Brexit.

What was the setting?

If you have been to a yoga class, practiced mindfulness or guided reflection, you know that the leader of these activities will often ask you to imagine a peaceful, happy, calming place. This might sound super abstract, but bear with me…Monte Barro was that place for me. We were staying in an Eco Hostel in the Lombardy Mountains overlooking the Brianza region, not far from Lake Como. It is no exaggeration, and maybe not enough to say that the view was stunning. In 10 days, in this secluded mountain range, I never tired of this view, I never wished we had more shops or busyness surrounding us. 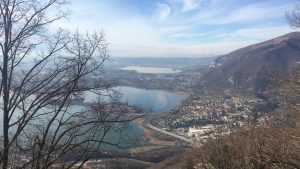 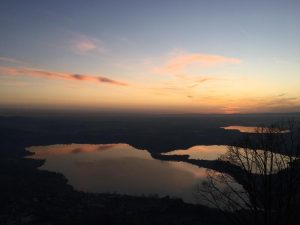 It was a perfect, stimulating environment for learning. We were also very spoilt by the hostel’s chefs Antonio and Vito, who offered us an endless supply of lasagne! Helping out in the kitchen in our cleaning teams was never boring with homemade Sicilian wine and lots of dancing! 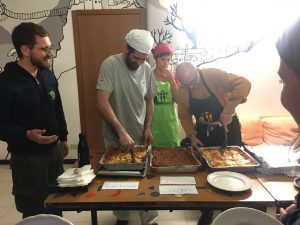 How did the project develop?

Y4E proposals are ultimately produced in film format, and the whole programme is super innovative. Y4E values young people’s input into policy-making in a way that I’ve never seen happen here in the UK. We spent the first couple of days doing team-building activities and getting to know each other. We practised intercultural learning and did lots of exercises using non-formal education. Gradually, the activities became more and more guided towards the general topic: media. With help from the facilitators, it soon became clear who was interested in which topic and we formed proposal teams.

My team were aptly called ‘ALLIES’ as we chose to focus on the misrepresentation of minority groups in advertising. After much deliberation, we decided that minorities are not necessarily underrepresented, but rather misrepresented. We are concerned that corporations are including marginalised groups in their advertisements, but it is on a superficial level. These corporations want to appear progressive, and politically correct. But really, they disregard whole communities, and include others just to meet a quota. Even when they do represent some, history has shown that their adverts are insensitive and unrealistic in relation to the communities they represent.

In order to try and mediate this issue we proposed a new initiative for municipalities in EU Member States;

I learnt so much from the different group members during this creative process, everyone had a different perspective from their home country. However, we all agreed that this is such an urgent problem that is present in all our nations. It was so cool to see our paper proposal come to life in the filming of the proposal. We wrote the script, spoke to the camera, and also hand-designed the props. We faced some challenges stemming from cultural political differences and slight variations in specific translations to English. However, it was a huge learning curve for us all, and we were really pleased with the proposal in the end!

I feel so grateful to Y4E for this opportunity, and to the network of Europeers for bringing it to my attention! I believe it is fundamentally important for young people to be part of democratic processes to avoid further disaffection with politicians. If our proposal is successful, we have the chance to return to Milan in May to present our ideas to MEPs and local politicians. Y4E has provided a bridge between young people and politicians that previously did not exist, they have opened up a dialogue that has helped me and 200 others feel they have a say in the legislation that impacts our everyday lives. By taking part, I feel a deep connection with Europe. I met some lovely people from three different countries and we worked together to initiate positive change. The Y4E summit has given me so much energy and motivated me to pursue more opportunities and shout about them to other young people in the UK!

Our proposal video will be published on Y4E’s website in a couple of weeks. I hope you will take a couple of minutes to check it out and vote for ALLIES! The link to the proposals can be found here; 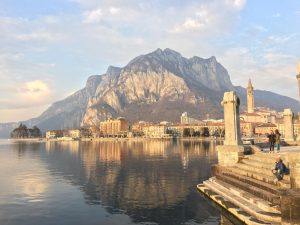